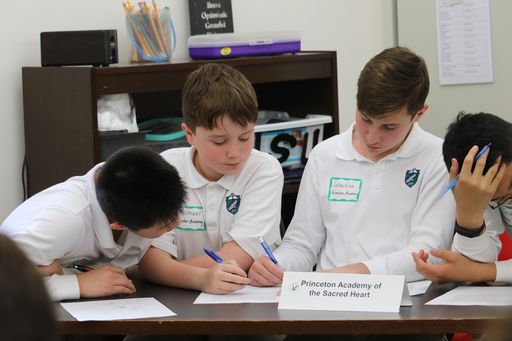 An Ethics Bowl is not a debate between the teams, instead, it's a collaborative event during which students discuss their understanding of the ethical issues presented in each case presented. They defend whichever position they think is correct, provide each other with constructive criticism, and win by demonstrating that they have thought rigorously and systematically about the cases and engaged respectfully and supportively with all participants.

Princeton Academy's team of seven participated in two rounds of competition consisting of two matches each. During the matches, they thoughtfully discussed four different case studies: Ban Box, Oh, Snap!, Paying a Ransom to Save Your Family, and Red Cross and the Taliban. All of the case studies were created by the NHSEB and can be read here.

Director of Secondary School Placement Taylor Kenyon and MS Social Studies Teacher Denise Quenault shared, "It was an honor and a blessing to work with the Ethics Bowl Team in preparation for the NJ Middle School Ethics Bowl over the past few months. Over time, we learned how to grapple with some very difficult ethical dilemmas and we learned the value of considering the viewpoints and opinions of others."

Mr. Kenyon continued, "I am so proud of both the way our team represented Princeton Academy in our conversations at the Ethics Bowl and of the fact that we were one of only eight schools to participate in the inaugural NJ Middle School Ethics Bowl. The energy at Kent Place was palpable and this event is sure to grow in numbers in the years to come. I am very excited for next year!"

Ms. Quenault and Mr. Kenyon served as faculty advisors for our team and Director of Technology Raymond Shay traveled with the team to serve as a judge for the event. Congratulations to our gentlemen scholars and thank you to all who participated!

Princeton Academy of the Sacred Heart is an all-boys K-8 independent school. Creative. Compassionate. Courageous. We bring out the best in boys.