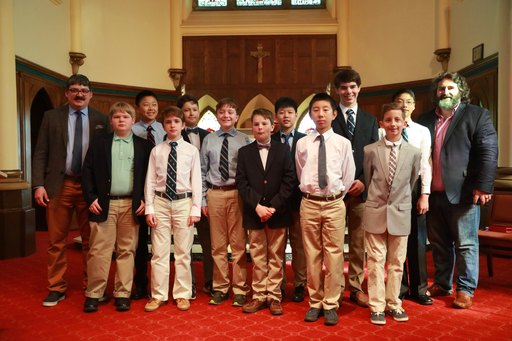 The Middle School Speech and Debate Team had a great day on Saturday, April 27! Princeton Academy had 11 students compete at the Holy Ghost Prep Tournament which hosted 130 entries from 14 schools. Princeton Academy's name was called nine times at the Awards Assembly and we had our first champion.

Jaime Duffy '21 and Joseph Morwald '21 competed in the largest and most difficult event of the day, Duo Interpretation of Literature. They performed a portion of the 1940 Radio Play "My Client Curley" by Norman Corwin.

MS English Teacher Nathan Weaver, Princeton Academy Alumnus Kevin Landers '16, and Director of Technology Raymond Shay were the PASH judges for the day. In addition, many of our parents watched rounds of competition. Congratulations to our gentlemen scholars! #PASHProud