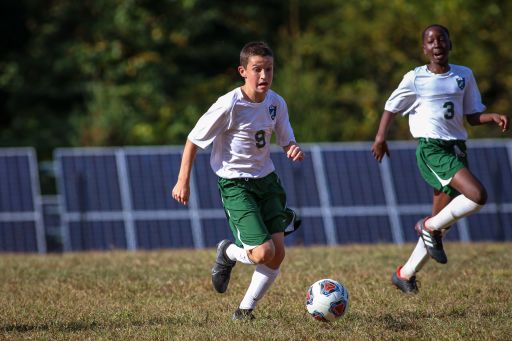 On Wednesday, September 30, in an email to its community, Princeton Academy of the Sacred Heart announced a partnership with Princeton Soccer Academy (PSA) to build a premier, eco-friendly turf athletic field complex on its campus. After almost two years of thoughtful planning, the school recently appeared virtually before Princeton's Site Plan Advisory Review Board.

"The partnership between Princeton Academy and PSA is an example of environmentally-aware community-building which will undoubtedly be good for all who utilize the facility," states Head of School Rik Dugan. "Princeton Academy is proud to lead in this space and is honored to represent the Town of Princeton as a showcase site for this revolutionary, fully recyclable surface."

As responsible landowners, Princeton Academy invited surrounding neighbors of its Great Road-Drakes Corner Road property to a socially distant, outdoor meeting on its campus on October 8. Attendees were presented with details regarding the project and were given the opportunity to ask questions and hear from PSA President John Newman, EliteTurf Chief Operating Officer Moshe Grant and Princeton Academy Head of School Rik Dugan.

"Some of the greatest qualities of any sports surface are not visible to the naked eye when the surface is complete," said Moshe Grant, Chief Operating Officer at EliteTurf. "A key factor within our POWER system is the effect the warps and wefts structure of our woven turf has on the permeability of our turf system. When combined with our Elite Turf POWER Drainage system by Hydraway, our fields become the fastest-draining turf surfaces in the industry."

On October 12, a group of Princeton Ridge neighbors submitted an opinion letter to centralnewjersey.com. The opinion letter which represents the voices of eight families sited inaccuracies regarding the scope of the proposed project specifically with regard to environmental impact.

Since the inception of the proposal two years ago and submission of the initial documentation to the Town of Princeton, many project improvements have been made to safeguard the environment:

Princeton Academy's campus is home to 40 geothermal fields, 700+ solar panels and a geodesic dome which the school uses for year-round gardening and science curriculum. The school is regarded as one of the most sustainable campuses in Princeton and maintains active educational relationships with The Watershed Institute, Sustainable Princeton and C-Change Conversations for the enhancement of its academic program as well as faculty and staff professional development.

The eco-friendly turf project proposed by Princeton Academy and PSA has exceeded requirements according to local ordinances with the protection of young athletes, the environment and the planet as core drivers. The Princeton Site Plan Advisory Review Board has agreed to advance the project to the full Planning Board for a public meeting on October 15, 2020, at 7:30 p.m. During this virtual meeting, the Planning Board will hear testimony from Princeton Academy and its consultants (civil engineer and planner) and from the representatives of PSA. Princeton Academy has provided a link to this public meeting via Zoom: https://princeton.zoom.us/j/92317363217 Webinar ID: 923 1736 3217.

About Princeton Soccer Academy: PSA is regarded as a leading youth soccer organization. They offer an elite player development model. PSA uses an all-inclusive program for the youngest lads and laddies just beginning their soccer paths starting at 3-years old as well as national and international-level competitions for 18-year-old teens. Learn more at www.princetonsoccer.org.

About EliteTurf: EliteTurf is a distribution and installation partner of Act Global, the global leader when it comes to synthetic turf. Through its POWER system, Elite Turf is proud to offer a 100% recyclable turf system that is more playable than grass, more durable than other synthetic turf systems, and healthier than both. Learn more at www.eliteturfusa.com.