PASH Celebrates the Feast of Mater

PASH Celebrates the Feast of Mater 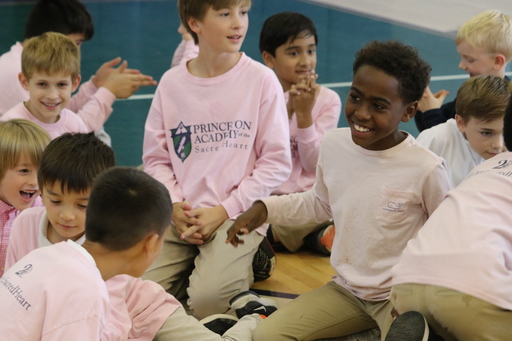 Princeton Academy celebrated with a special Prayer Service planned and coordinated by Student Liturgy with the help of Director of Community Liturgy Lorna Cole Durish. Students, faculty and staff wore pink shirts to honor the day as well as Breast Cancer Awareness Month.

A description of Mater Admirabilis from rscj.org: In 1828, Pope Leo XII invited the Society of the Sacred Heart to found a community and school at the Trinità dei Monti, a monastery at the top of the Spanish Steps in Rome. For 300 years, the monastery had housed a community of Minims, an order founded by St. Francis of Paola in the 15th century. The Order of Minims had abandoned the property during the French Revolution, and by 1828 the buildings were in need of repair. A contingent of RSCJ went to Rome to put the property in order under an agreement with the French government, which owned the property and specified that only French nuns would occupy the site.

Sixteen years after Religious of the Sacred Heart came to live at the Trinità, a young French girl, Pauline Perdrau, was admitted as a postulant to the Society. A talented artist, she asked permission of the superior of the house, Mother Josephine de Coriolis, to paint a portrait of Our Lady on a wall of a corridor that led to the sisters' cloister. However, Mother Coriolis was hesitant, because she knew the artist was unfamiliar with fresco painting techniques.

Pauline Perdrau persisted, praying to Mary for strength. She prevailed, and for months after receiving permission to begin, she devoted several hours a day to preparing the surface of the wall and painting her image of Mary.

When the painting was complete, the colors were thought to be too vivid. The fresco was covered with a protective cloth to give the paint time to dry. Days later, when the cloth was removed, the colors had softened to the shades of pink and blue and ivory that are so well known to visitors to Mater's shrine today. To Pauline Perdrau, who later became a Religious of the Sacred Heart, the change was nothing less than a miracle.

Among the many stories associated with Pauline Perdrau's painting of Our Lady is this one: In the fall of 1846, Pope Pius IX paid a visit to Trinità dei Monti and was overwhelmed by the beauty of the fresco of Mary. "Mater Admirabilis!" exclaimed the pope, giving the painting of Mary the title it bears to this day.

Today, a statue or painting of Mater Admirabilis can be found in every Sacred Heart school around the world. Her feast is marked with liturgical celebrations, alumnae gatherings and pink goûter on October 20.

Princeton Academy of the Sacred Heart is an all-boys K-8 independent school. Creative. Compassionate. Courageous. We bring out the best in boys.