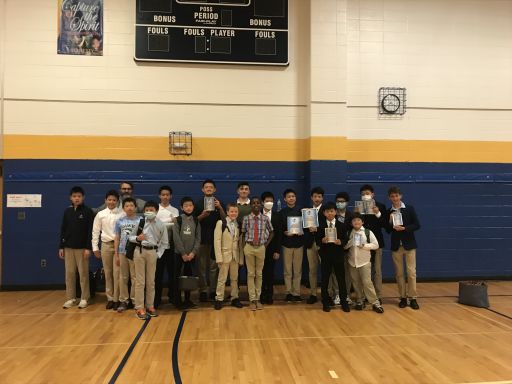 For the third time in four years, and the first time in-person since March 2019, the Speech & Debate Team from Princeton Academy of the Sacred Heart competed at the New Jersey Speech & Debate League (NJSDL) Middle School Championship. Two Princeton Academy students were named Champions of their events and overall Princeton Academy of the Sacred Heart earned a School of Excellence Award as nine Hawks received Finalist Awards. All competitors performed with excellence while sharing their voices on topics of importance to them and of significance to our world.

On Friday, March 13, 2022, students in Grades 5 through 8 traveled about an hour to Long Valley Middle School in Washington Township. Despite COVID-related restrictions, some athletic conflicts, and last minute transportation issues, the team still managed to have 20 entries compete in Congressional Debate, Original Oratory, Oratorical Declamation, and Poetry Interpretation.

In the category of Original Oratory, students wrote and delivered from memory an informative or persuasive speech on a topic of their choice. In the championship's largest event with a very competitive Final Round, Jeffrey Y. '23 was named the 2022 Champion in Original Oratory and Daniel M. '22 earned 3rd Place. Aidan L. '23 just narrowly missed the Final Round, finishing in 7th Place, while Aiden H. '24, Jonathan I.-O. '25, and Ethan C. '23 also performed well delivering original orations.

In Oratorical Declamation, students chose a speech delivered in a public venue (such as a TEDTalk or commencement speech) to memorize and deliver. Owen S. '22 was named the 2022 Champion in Oratorical Declamation and was the only student across all events throughout the championship tournament to receive all five First Place ranks. Princeton Academy incredibly had four of the six Finalists in Declamation and ended up taking the top four awards with Jayden L. '25 earning 2nd Place, Daniel M. '23 earning 3rd Place, and Jeffrey Y. '23 earning 4th Place. Anthony H. '25 just narrowly missed placing as a Finalist on a tiebreaker and Allen C. '24 had a great first tournament!

In Poetry Interpretation, students presented a program of poetry on a topic of their choice. Gonzalo K.-P. '25 tied for 3rd Place in just his second in-person tournament and his third tournament overall.