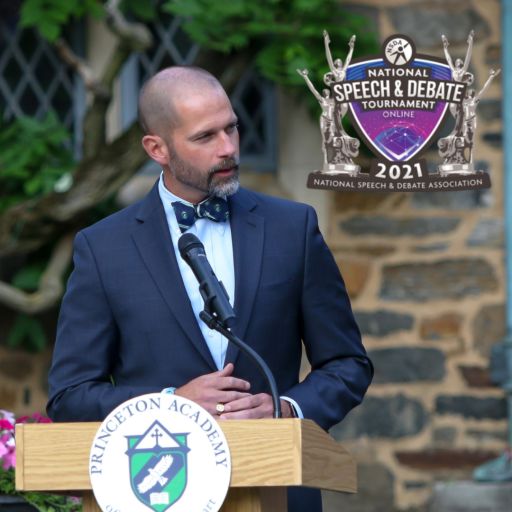 During the opening ceremony of the 2021 National Speech & Debate Association (NSDA) Tournament on June 13, it was announced that Princeton Academy Head of School Alfred F. Dugan III was honored as Middle School Administrator of the Year. This prestigious award is selected annually by the NSDA and this is the first time that an administrator has been awarded from New Jersey.

Dugan is an esteemed, well-respected educator who has served and led in New Jersey independent schools for over 20 years. His experience ranges from co-ed settings to all-boys schools. He is a graduate of Williams College and holds a master's degree from Teachers College, Columbia University.

In his nomination letter, Director of Technology & Summer Programs Raymond Shay stated, "Rik is an outstanding supporter of speech and debate activities on the middle school level, as well as an advocate for helping all students find and share their voice."

Through the pandemic, Dugan worked with the Princeton Academy coaches to ensure that students on the speech & debate team not only could continue to compete online, but that the program could actually grow and accommodate even more students participating in NJ Speech & Debate League tournaments, national invitationals, and the NSDA Middle School Speech Challenge in 2020 and 2021.

In his acceptance speech, Dugan emphasized the importance of effective communication, "Amidst these extraordinary times the competency of communication is perhaps the most important skill young leaders can hone... When combined with authentic empathy and an appreciation for another's perspective, effective communication has the power to bring about positive change in the world."

The National Speech & Debate Association's Middle School Administrator of the Year program began in 2016 as a means to recognize outstanding middle school principals and administrators. The program annually honors administrators who have succeeded in providing high-quality opportunities for students in speech and debate programming as well as demonstrating exemplary contributions to the profession.